Get Disney's Frozen on Blu-ray and DVD

Watch your favorite movie as often as you want with Disney's Frozen on Blu-ray or DVD. The academy award winner for best animated feature film of the year stars Kristen Bell as Princess Anna, Idina Menzel as Elsa the Snow Queen, Jonathan Groff as mountain man Kristoff and Josh Gad as Olaf the Snowman. Give the gift of Frozen this Christmas with one of Disney's best movies ever.

This magical film is filled with great music, likable characters, and striking effects. Frozen is a fairy tale about overcoming obstacles and the power of true love. Princesses Anna and Elsa are sisters and the closest friends until one day Elsa discovers that she can no longer control her power to create ice and snow. Terrified for the safety of her sister and everyone around her, Elsa isolates herself and vows to never feel any sort of passionate emotion again in hopes of suppressing her powers. Kristen Bell and Idina Menzel deliver rousing performances of great music that includes original songs by Kristen Anderson-Lopez and Robert Lopez and an original score by Christophe Beck, and the visual effects are simply stunning. 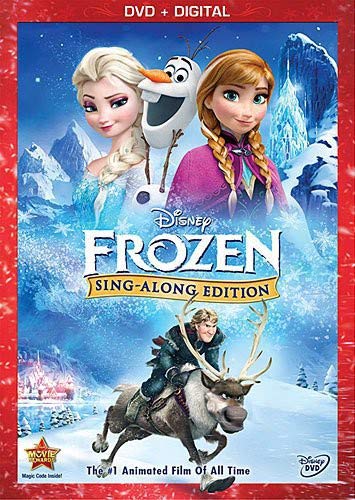 New today and just in time for Christmas: it's the Frozen Sing Along Edition on DVD! Viewers and fans can follow the lyrics of the hit songs from Frozen by watching the bouncing snowflake icon as it dances across the words!

Disney's Frozen on DVD and Blu-Ray

Winter’s a good time to stay in and cuddle with your favorite movie: Frozen starring Kristen Bell as Princess Anna, Idina Menzell as Queen Elsa, Jonathan Groff as Kristoff and Josh Gad as Olaf.  This 2-disc set includes bonus extras, including "The Making of Frozen", deleted scenes, two different "Let...

Today only, at 1:20PM EST, Amazon is having a Lightning Deal on the Frozen 2-Disc Blu-ray & DVD Collector's Edition! The deal's sale price will be revealed when the deal goes live at 1:20PM EST. Amazon sells this set well under the list price of $44.99 already, so the today's Lightning Deal should be a good one!